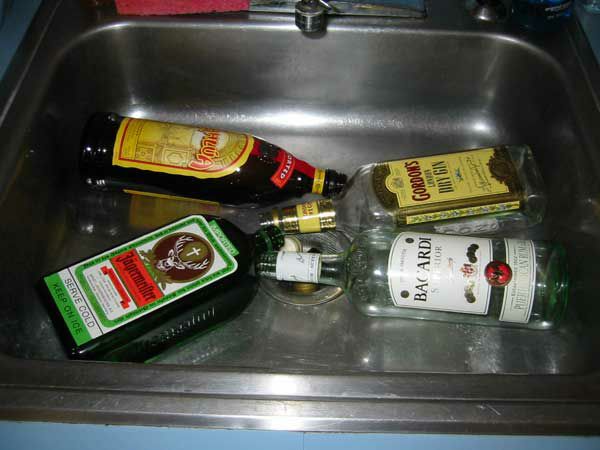 On September 23rd of 2004, I voluntarily poured out the four bottles of hard liquor that were in my house in the liquor cabinet to make aware my parents that I was having difficulty with my drinking alcohol. My parents hadn’t known I was drinking more than usual as per my difficult classes at Worcester State College I took three night classes at, I had difficulty with the material and I was becoming depressed I didn’t understand it naturally, so I drank until September 23rd when I took the photo of empty bottles I’d dumped out for my Mom to find and aware her as to what was happening in my life. I also put the photo on my journaling dot-com website I haven’t owned since 2006. I needed help because Calculus I was so difficult all I could do was be sad and drink, same with C++ and Visual Basic which were world’s harder than what I’d been taught about programming at Quinsigamond Community College where I graduated from with good grades in my Computer Science Major.

MY OWN PARENTS KNOW ABOUT SOME LEGAL BULLSHIT WITH CERTAIN INDIVIDUALS WHO GAVE ME A TRAUMATIC BRAIN INJURY, SPEEDING, DRUNK, “SET UP” !!! MY CRASH WAS A “SET-UP !!! — A group of people in my life “set me up” on November 2nd, 2004 and feeling depressed, needing a drink, and proceeding to get drunk at a bar AS PER MANY SUGGESTIONS FROM PEOPLE WHO WANTED ME ARRESTED FOR DRIVING DRUNK, THEY ALL JUST TOLD ME TO GO TO A BAR AND RELAX !!! AND TAKE A KLONOPIN- MY MEDICINE FOR PANIC !!! — I wasn’t on an anti-depressant or any psych-meds that I am now forced to take too many psych-meds because of my-enemies and my-parents knowing the whole “Plan” to make me suffer — my Mom and Dad got Health Care Proxies and they force me to do things — I hadn’t drank for over 2 months in 2004 prior to, leading up to my TBI, and I was trying to stick with it, but some people I knew and liked and trusted said oh, go to a bar and just have one drink to cool you out from Withdrawing from difficult Calculus I, but I had a bunch that the bartender and patrons were giving me for free, part of the plan — the bar was going to be paid back by my parents or my bald uncle or my girlfriend of almost a year… I voted in Leicester that day and I voted with cops watching me… I fell in the parking lot with the police seeing this and it was raining very hard… and off I drove, first to Derek’s where I was being tape recorded or something, then I was speeding down Henshaw Street with everyone calling my phone just a dozen or so people were screwing up my focus… ALL YOU FUCKS WHO WERE “GETTING EVEN” for my writing distasteful JOKES on a PRIVATE FORUM that Andy paid the owner, Tony (Basatak), to share my password with him — a fan-forum of shock-jocks from WAAF… But my driving, Andy Gleick and Allyson (Drucker) Hodgkins told me all awful shit and it made me drive too fast… Andy was calling from my house and he was in my room and he did shit on my computer to prove it– playing files and shit — FUCK YOU !!! HAHAHA YOUR “PLAN” MADE A LOT OF PEOPLE CRY *** AND ALMOST KILLED ME *** !!! sorry Mom and Dad — you should have got me help with my drinking and try at abstinence when I dumped out FOUR full bottles of alcohol down the kitchen sink ((( But you couldn’t because Andy can’t take a joke and wanted me arrested ))) I slowed way down with all alcohol after my car crash TBI and now, nowI haven’t had more than one beer or one drink on holidays and cookout’s over the past three years !!!

But oh, Andy Gleick and Allyson had the idea to get me to drink again… bald bitch, I’ve never had sex with a virgin !!! yet you did shit to J. !!!

IT WAS A SHOCKING “SHOCK-JOCK” JOKE ALL MY FRIENDS ON THE SITE THOUGHT WAS FUNNY “CRINGE HUMOR” LIKE JIM NORTON DID — HE GOT A JOB ON THE TONIGHT SHOW WITH JAY LENO . . . FOR MAKING “CRINGE HUMOR” JOKES I HAVEN’T MADE SINCE !!!

I believe Sue Rezuke, my GNC boss, and Mark Yetter, an even higher boss, were on Henshaw Street in Leicester chasing me, and racing alongside me trying to get me to pull over, and that made me angry. They weren’t as fast as my Turbo All Wheel Drive Subaru and I lost them, but as I was still driving so fast I underestimated a curve in the road and I slipped on wet leaves.

My side airbags saved my life, and the airbag on the steering wheel didn’t deploy because the leaves sent me completely sideways.

I spent one month in the ICU at UMASS in Worcester on a feeding tube for three weeks and I was intubated down my throat on a breathing machine. And I was there for a full month, then I was at Fairlawn Rehab in Worcester for 2.5 months where I would use a wheelchair and I couldn’t walk because my left-hip was in SEVEN PIECES !!!

After my 4/15 “abilities” Glasgow Coma Scale at the scene of my Traumatic Brain Injury where I wasn’t functioning physically or mentally… and after 6 months to a year of Therapies and working at my Dad’s ECM Plastics, Inc. in Worcester, I went back to Worcester State University where I first got a B+ in Health I ((( Before the “set-up” that my boss was involved in, I had worked at General Nutrition Centers for more than a couple years ))) and I got a B+ in Creative Writing, then with an A- in Poetry II — my TBI effects my memory and I couldn’t pass MOST classes — I learned how to write prose and poetry though.