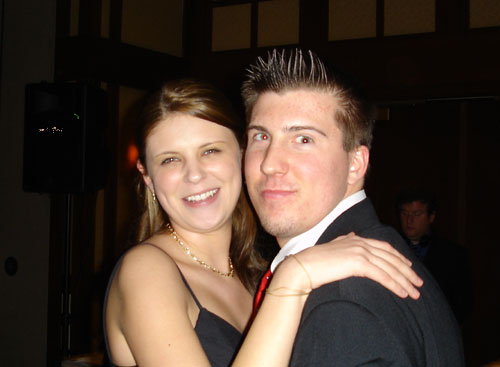 That’s a photo below of B. and I at a Christmas Party which I have never shared with anyone before, yeah you see- it was just like the worst photo possible in my own imagination and as my eyes align horribly when I look to my left- they separate like a motherfucker IMHO yet I now need content to share…

Never saw her ‘gain, no… HOWEVER her brother worked his ass off with computers and tech-stuff and mathematics until, Josh, this hard-worker had enough to buy a Lotus Elise coupe- and until he had enjoy enough of those magic 100% Benny Ben Ben’s Frankfurters? as violins play with these uplifting notes, but HMMMM BILL NOTES ??? notes of bills like American Currency 1,5,10,20,50,100 it goes, and nobody knows what’s in my wallet right now, but I’ve made a few friends in here I share my money with- Alexandra she likes sushi… me not so much, although I like the cheap sushi they sell in Wal-Mart Supermarkets

There’s one of those near me and I’m saving up for BOLT-CUTTERS that I’d hopefully get a five-finger discount on them, at Wal-Mart to relieve myself from this SHITTY, SHITTY, HELL-HOLE, now God I pray as you have seen I’m always looking for nuclear relief from N. Korea to send me into space AT A GOOD “PACE” -a la million billion trillion- oh you shoulda seen the look on my face with I reached the edge with the all-powerful, all-knowing, two thumbs-up, one for each orgasmic Oh! the look on my face, Oh! (I didn’t know it was possible to have two) and the look on God’s face that he was ecstatic I found him… while her face I couldn’t see it but I rubbed her up and down (rubber: optional)

But that’s not the WORST PART !!!!!
yum watermelon
The worst part is that I grabbed her ass with both hands while a song was playing which I thought would be fine – like I was just checking to see if she was “cool” and that means “If, and only if, she had on something from Vicky’s” .

After doing that I felt so much shame when she frowned-  I don’t know what I expected, maybe a smile ??? It told me that I must “retard my garish nature” there’s a line I used before…